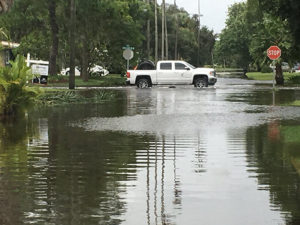 Today marks one year when my car got flooded, I got stranded, and I learned a huge lesson: I call it my floodiversary.

We keep a small saltwater tank, and to keep the tank healthy, it needs regular water changes. Before the Fourth of July weekend I decided to swing by the local fish store and pick up 5 gallons of water to replenish the tank. That way I could get the chores out of the way in order to relax and enjoy the rest of the holiday weekend.

I got to the store in time and picked up a five-gallon industrial container. I put it in the back, put the hatch down and started the 30-minute trip home. About halfway there, I made a turn. That’s when the trouble started. The car began to lose power. Fortunately I was able to pull over. I tried to start the car. Nothing. A new car…why? Then it occurred to me: the %$@*& water. I went to the back, opened the hatch and sure enough, my trunk had about an inch of water gently sloshing back and forth. I started to try and scoop the water out with the bucket, but it was impossible.

I went back to the car, got in and left the door open and started to assess my options. It was sweltering–about 90 degrees; I was in the middle of nowhere and had spotty cell service. I let my family know where I was and tried to connect to my car’s emergency system. After many tries and fails, and even speaking to an engineer, it was clear the car was not going to start up again. So I waited for the tow truck and my husband, as I swatted mosquitoes and thought about cold drinks and air-conditioning.

The tow truck arrived from the dealership, but the guy was in a hurry. He refused to let me ride back with him, but it was a war of wills. I was determined not to be left on the side of the road, so I stalled by asking him questions until my husband pulled up. We both watched as the car was raised on the flatbed, with water streaming out the back. It was a holiday weekend, so the car would have to sit on the lot in the heat all weekend. My husband had brought a stack of towels, so we did what we could. We looked at each other. No more water in the car.

On the ride back home I called my insurer. They couldn’t do much over the weekend but would be back in touch after the holiday. The next week I got the call. After the deductible was met, the damage was all covered—about $4,500 all in. My insurance also covered the cost of a rental car. The adjuster assured me the car would be fine; it turns out the water had shorted out a panel located in the trunk of the car that connected to its “brain.” But after the ordeal, it was a relief to know the car would be ok and ready to drive after a few days. The adjustor had been pleasant and helpful. “I got to tell you,” he said, “I’ve seen flooding before. But I’ve never seen a car flooded from the inside.”