Why a Below-Normal Hurricane Forecast Could Be Misleading

Forecasters with NOAA’s Climate Prediction Center now say the chances of a below-normal Atlantic hurricane season have increased to 70 percent, up from 50 percent in May.

In its updated outlook, NOAA said overall atmospheric and oceanic conditions that are not favorable for storm development will persist through the season.

Check out the revised numbers in this NOAA graphic: 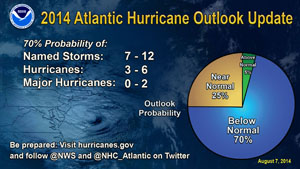 However, coastal residents may want to heed the words of NOAA lead forecaster Dr. Gerry Bell:

“Tropical storms and hurricanes can strike the U.S. during below-normal seasons, as we have already seen this year when Arthur made landfall in North Carolina as a category-2 hurricane. We urge everyone to remain prepared and be on alert throughout the season.”

This echoes the warning of others. After all, it only takes one landfalling hurricane for a season to go from below-active to active for coastal residents.

A recent post from Weather.com gave the classic examples of 1992 and 1983:

“The 1992 season produced only six named storms and one subtropical storm. However, one of those named storms was Hurricane Andrew, which devastated South Florida as a Category 5 hurricane. In 1983 there were only four named storms, but one of them was Alicia. The Category 3 hurricane hit the Houston-Galveston area and caused almost as many direct fatalities there as Andrew did in South Florida.”

The $15.5 billion in estimated property losses ($23.4 billion in 2013 dollars) paid out by insurers for Hurricane Andrew ranks second in a PCS chart via the I.I.I. of the 10 most costly hurricanes in U.S. history, after Hurricane Katrina in 2005.

For More News and Information on Insurance and Hurricanes, Visit III.org