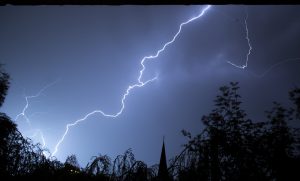 Greased lightning, fast as lightning, lightning in a bottle, lightning-bolt ideas. So many positive images of lightning exist that we may forget that lightning is deadly. Especially in Florida. This time of year, almost every locale is subject to a summer thunderstorm. And, we may get so used to them that we forget that thunder is the sound lightning makes. If you hear thunder, go for cover.

A construction worker was killed by lightning this week at a job site in Pembroke Pines, a victim of a direct lightning strike. Another worker at the same job was injured. Earlier this month, lightning caused an apartment fire in Orlando, and eight people had to find a new place to live and deal with replacing their charred belongings. Not all of them had renters insurance.

This should be no surprise then: Florida has the highest number of lightning-related fatalities. Lightning fires in non-residential properties caused an average of $108 million in direct property damage each year from 2007 to 2011 in the U.S. There are many things you can do to protect your home and your business from lightning damage – and the go-to resource is the Lightning Protection Institute. And, there is one very important thing to do to protect yourself: If thunder roars, go indoors.

Another important point: Those so-called myths about staying off the phone and out of the shower when a thunderstorm is raging are NOT myths. Get the facts on lightning safety