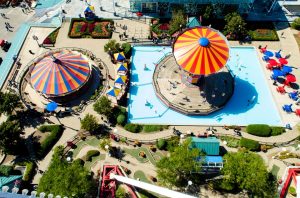 According to the National Safety Council, in 2013 about 315 million people visited an estimated 357 fixed-site amusement facilities in the United States. The council reports that there were a total of 1,221 injuries that year, or 0.9 injuries per million patron-rides. About 53 percent of the injuries occurred on family and adult rides, a decrease of 1 percent from 2012. Roller coaster injuries, which are counted separately, accounted for 40.5 percent of all injuries, down 4.1 percent from the previous year. The remaining 6 percent of injuries occurred on childrens rides, down 17 percent from a year earlier.

SNAPSHOT OF AMUSEMENT PARKS AND INJURIES, 2013 (1)

(1) Facilities that operate fixed-site amusement rides only. All data are estimated by the National Safety Council.

The U.S. Consumer Product Safety Commission collects data on fixed rides at amusement and theme parks, along with mobile rides at events such as carnivals, and other events. It estimates that there were 40,901 hospital-treated injuries from accidents at these sites in 2014 up 7.2 percent from 2013. In 2014, 18,80746 percentof these injuries were sustained by children between the ages of five and 14. The majority of those injured of all ages were treated and released, but almost 900 people were hospitalized or killed.